What does “carbon neutral” mean?

We hear the term “carbon neutral” and “carbon negative “all the time. We hear it in advertising, we see charges for offsetting carbon footprints when purchasing plane tickets or having the chance to purchase a “carbon neutral” option, but what exactly does that mean? What is carbon? Why should we be offsetting or eliminating it? Let’s find out together! 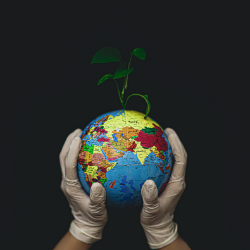 Carbon in the context of “carbon neutral” or “carbon positive” is the shorted term for carbon dioxide, a greenhouse gas primarily produced from the burning of fossil fuels—coal, natural gas, and petroleum—for energy use. This gas is what keeps the earth warm by trapping heat from the sun inside the ozone layer. When there is too much carbon-dioxide in the air the earth becomes too hot, this is global warming.

Carbon dioxide is created in many ways, but a huge contributor is landfill, coal burning and oil and gas production. Animals also create carbon dioxide as a form of waste (farts). Trees offset this by removing carbon dioxide from the atmosphere. With the mass deforestation happening across the planet and the burning of coal and massive lots of landfills creating more and more carbon dioxide that isn’t being offset naturally we are seeing way too much carbon being emitted into the air that is contributing to global warming and climate change.

What is a carbon footprint?

Why should we be lowering our carbon footprint?

Since the development of the many forms of transport we have that burn fossil fuels (like air travel, trains and personal vehicles) the planet has become overloaded with carbon dioxide that cannot be naturally offset and it is becoming a real problem.

What does it mean to offset your carbon emissions?

A carbon offset is a way to compensate for your emissions and balance out what you’re taking from the earth with what you’re putting back in. This can be done by preventing the release of the gas, reducing the emission, or entirely removing the gas from the atmosphere.

How do I lower my carbon footprint?

Unfortunately, with the way we have progressed in the world there are not many ways to entirely avoid putting gases into the atmosphere, but we can compensate in many ways. First you must work out your unavoidable emissions. Think about things like how often you drive and if there’s a greener way for you to travel, how much waste you produce, if you recycle and compost rather than tossing everything away, if you shop second hand or purchase new stuff and how much electricity you use and where the energy comes from.  You can also check out our handy list of 10 things you can do to lower your carbon footprint!

The best way to offset your carbon footprint is to give back to the earth. This is why it is very important that we stop taking from the planet without giving back. You can take action by planting trees and supporting companies that do not contribute to carbon emissions, like Rosella Street! For every transaction made on Rosella Street we plant a tree in an indigenous community that grows food for bush tucker and helps reduce the amount of carbon dioxide that is emitted. The good news is that some sources say that we can act now by planting at least 6 trees per month! So, get involved, get planting for our planet!

Getting started on Rosella Street!

Welcome to Rosella Street, your new neighbourhood where you can share and contribute within a safe and sustainable community! Let’s start with the basics,

What is landfill? Landfill is the oldest form of waste disposable and comprised of essentially everything we throw away in our lifetime. Australia creates over 76...